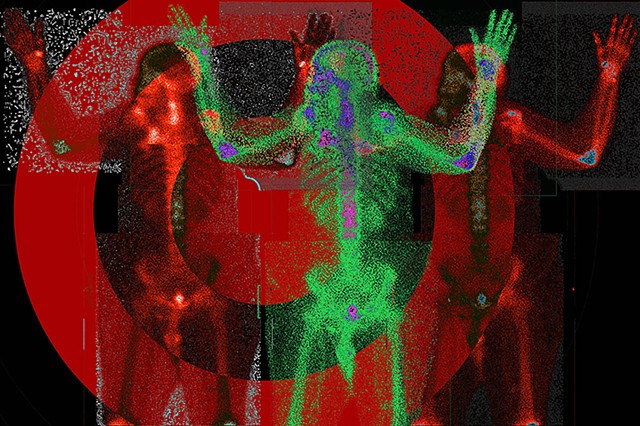 *In 2016 I was diagnosed with prostrate cancer. This project incorporates the internal documentary images of my body (after going thru removal of my prostrate and radiation treatments to fight prostrate cancer) with codes and signs to create open narratives about identity, social issues, sex and economics. They are self-portraits exploring the Black Body.

The project title "Worth" is both an adjective and a noun and is used as both in the images. The use of the skeleton with arms raised is about being defenseless in life and death. The pop art colors add an afro-futurist look to the images along with a ray-gun feel from some of the signs. Arms raised is the code for Black me surrendering to the authorities today and yesterday.

This project incorporates the internal documentary images of my body (after going thru removal of my prostrate and radiation treatments to fight prostrate cancer) with codes and signs to create open narratives about identity, social issues, sex and economics.

My work also visually explores how Race and Rhetoric distort images thru a symbiotic relationship of photo images, language and symbols (signs & codes) creating images that are artificial yet believable in the context of postmodernism. It is a social practice addressing issues of concern in the African American community.

I use portraiture as a tool along with language and symbols as devices for identity, historical, political and social commentary.

Appropriated or original photographic and graphic images are combined to produce “OP/POP Art” portraits and images. The digital medium was used in away where chance combinations of layers and blending programs were discovered & used like painting. I digitally dripped layers of images through each other producing one of a kind chance combinations. Colors & images become available in ways not seen before, altering the visual perceptions of the images as they play with the senses.

I'm a graduate of the School of the Art Institute of Chicago. and have practiced Graphic Design for over 40yrs. I have incorporated my design training into my fine art work to make images that are graphic and open to many interpretations. My use of appropriated images is important in my work because I 'm able to manipulate their context and elevate the meaning of images that we may take for granted.